Over the past months, the team been getting questions about the 'status' of the 'Steel Force Simulation' for Dorneyonline.com! We are glad your interest is still with us by we thought you lost hope in us since its been too long on announcing a beta test version.

There's been some snags and as well other things that has made the project slow down due to lack of personal free time on our busy life schedules like work, family life, vacations, sickness etc...

But don't fear! We are still development and we've got the most asked questions about the 'Steel Force Simulation'.

Q) When will the beta testing start?
A) There hasn't been an answer quite yet but we are about 95% sure that TWO important elements must be completed and quality assurance ready before we start testing for the beta testers and then later the public release. We'll make an announcement on our website and this blog when testing will begin. Be sure to follow our twitter feeds as well at www.twitter.com/themagical & www.twitter.com/randydorney

Q) Do I need to sign in to the site to play?
A) Since we are still working on the scoring system element, we advise you to have account with us since we'll be needing to make sure the scoring system is working properly. **Note: This feature may or may not be ready on beta/public final release but may be an update on a future release version.

Q) I have an Android device, will I be able to play/test the sim?
A) Since the Android device has pre-installed Adobe Flash Player 10.1, it may not have the
same experience on the PC/Mac. We are still testing to make sure its enabled on all smartphone devices. If you would like to help test, send an email to me at sdt@themagical.nl .

Q) I own a Mac, will it still work on my computer?
A) Yes, the same experience should work on all computer platforms. It must have Adobe Flash Player in order to work properly. Recommend 10.1 and higher for the best simulation experience! Visit http://www.adobe.com/go/getflashplayer

For more questions on our beta testings, be sure to check out our beta page at: http://randydorney.blogspot.com/p/beta-testing-qa.html

The webmaster/founder of Themagical.nl posted some interesting tweets recently and I thought I would keep you posted on the current status of the '#SteelForceSimulation, #SF Sim, #sfsim' updates. (**If you on twitter, be sure to follow us at: @themagical and @randydorney.)
Links: www.twitter.com/themagical & www.twitter.com/randydorney

Thanks for reading and we hope to hear from ya real soon!

Behind The Scenes: Steel Force Sim

It's been awhile since there's been new postings, thank you for your patience for waiting for new content. I know you'll enjoy this new updated post treat!

On June 21, was the official day of Summer in the United States. So since schools are now out of sessions and most of you guys and gals are now enjoying your summer break before going back to school in August/September months.

Well, as you seen in today's title post I thought I would start off the new series of giving you some behind the scenes look at our newest co-project website that we've been working for our Partner website Dorneyonline.com !

Let's begin shall we?

This is the VERY FIRST PUBLIC view at our concept design of the Steel Force Simulation that was first release back in July 2010. This was already working in animation from a working train, lights dimming effects as well some sounds effects.

The owner of Dorneyonline.com thought it was ok but needed more work to make it perfect as you can see from today's current simulation preview. You can tell a lot of things changed from the initial concept to the current preview that was released this month. 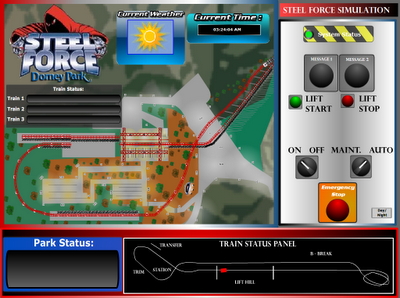 You can tell that both of the layouts are the same format size but the elements
in the simulation was changed to make the game play more playable.

From the buttons control to even the changes to the modules of the concept
design to current has been a major update.

Yet, the game still had the same feel as it was first thought up from the July 2010
preview.

Even though some elements were removed, we still have them intact to be used
in the game if we decide to fit into the game or not.

Be sure to keep your eyes peeled for more updates and behind the scenes look!

Reighard
Posted by Randydorney at 3:13 AM 0 comments

I know its been a quite for couple of months (February) without anything new in particular. And I'm sorry. :(

It's been a long time since we've talked about any new information related to the Dorneyonline.com Simulation updates and I should update you on it.

- Updated UI (User Interface) : From the last updated pictures you've seen the control panel have made huge changes. More shiny effect has been added and new modules information as well. It feels like a real ride operators control panel (which we try to make it realistic as the real life version).

- Control Buttons Tweaked (NOT FINAL) : The buttons you see above shows a slight change from the last public build screenshot. Though keep in mind, this isn't final until beta or even public release. We are still developing to the taste for all users will enjoy.

- Current Weather Module (Updated/Working) : Again, this too has gotten a major changed in appearance as well. This is working but its not shown in this current screenshot. It displays weather day/night affects. Currently still tweaking the coding to reflect the *simulation game experience. (*This feature may or may not be available for beta/public release. It will be an additional build update feature version once it debuts on Dorneyonline.com website)

- Park Operations Module (Working/Currently Developing) : As you've seen in the last screenshot public versions, this will be displaying many information for the "Ride Operator" as well alerts that's going on within the virtual park/ride attraction. *This feature will be giving insight to the ride operator to manage/change to the current simulation experience game play. (*This feature may or may not fully be ready to full potential once beta/public release online.)

The webmaster/founder of Themagical.nl posted some interesting tweets recently and I thought I would keep you posted on the current status of the '#SteelForceSimulation, #SF Sim, #sfsim' updates. (**If you on twitter, be sure to follow us at: @themagical and @randydorney.)

Thanks for reading and we hope to hear from ya real soon!

At 9:30am Pacific Time (12:30pm Afternoon Eastern Time) , Disney Parks Blog will be having the official ceremony opening of the attraction streaming LIVE in the parks as well.

Here's a nice AD Promo that Disney made! It's quite funny in my opinion.

Be sure to watch this page when we'll host the link as well to view.

**If you miss the event, we'll be having links to where you can watch it
on your own leisure time.

If the live stream isn't replaying, here's the same stream but recorded for your viewing pleasure.

This morning we celebrated the opening of Star Tours at Disneyland park with the help of some very special guests. 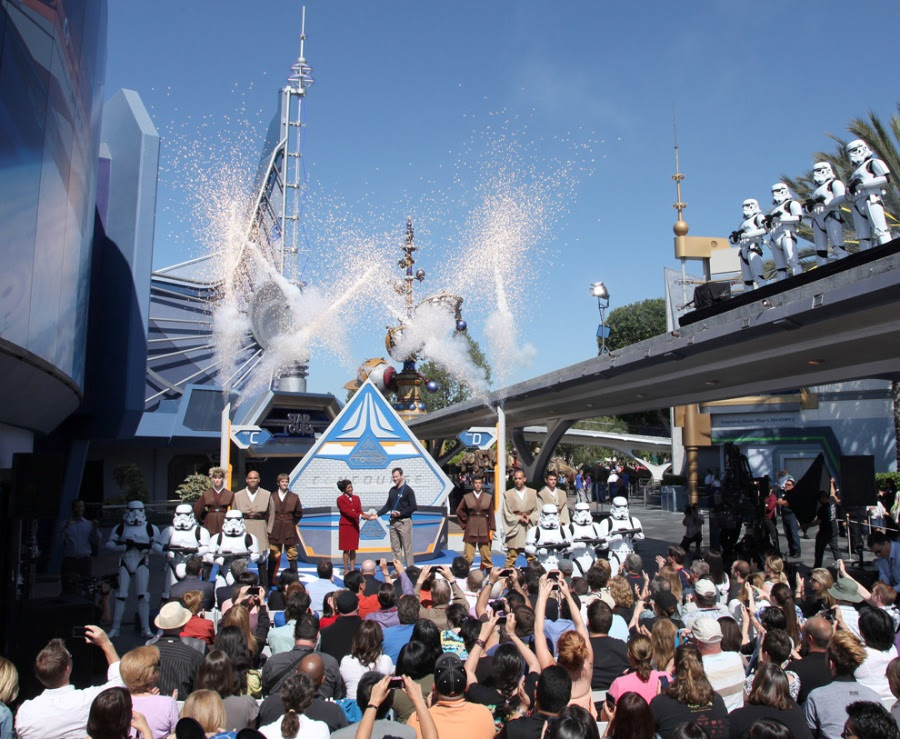 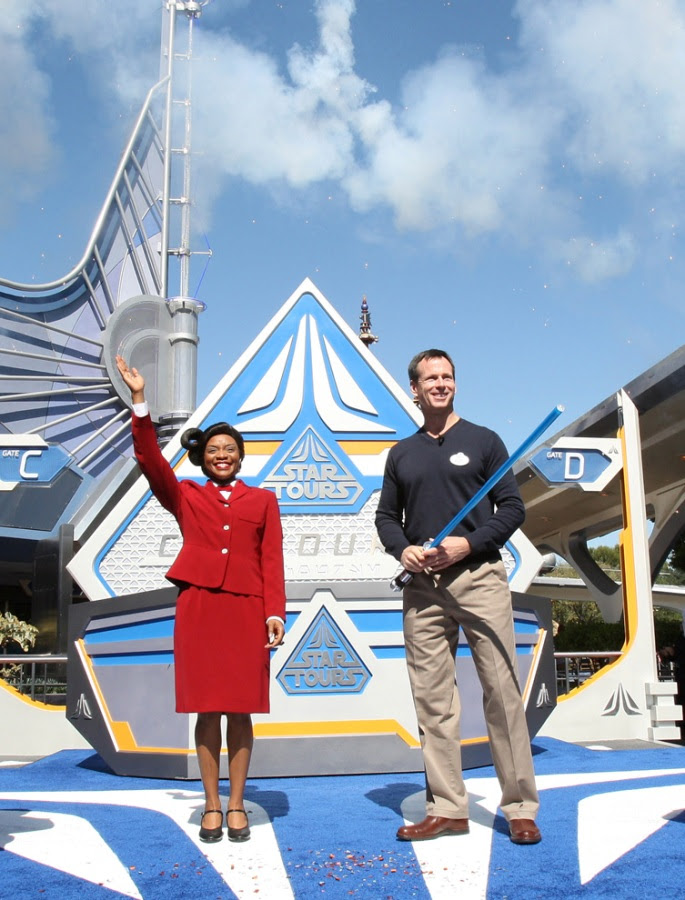 There were even more faces that Star Tours fans would recognize, as passengers gathered from across the galaxy to board one of the more than 50 possible trips aboard the attraction, including the icy planet of Hoth, the jungles of Kashyyyk and the watery world of Naboo. 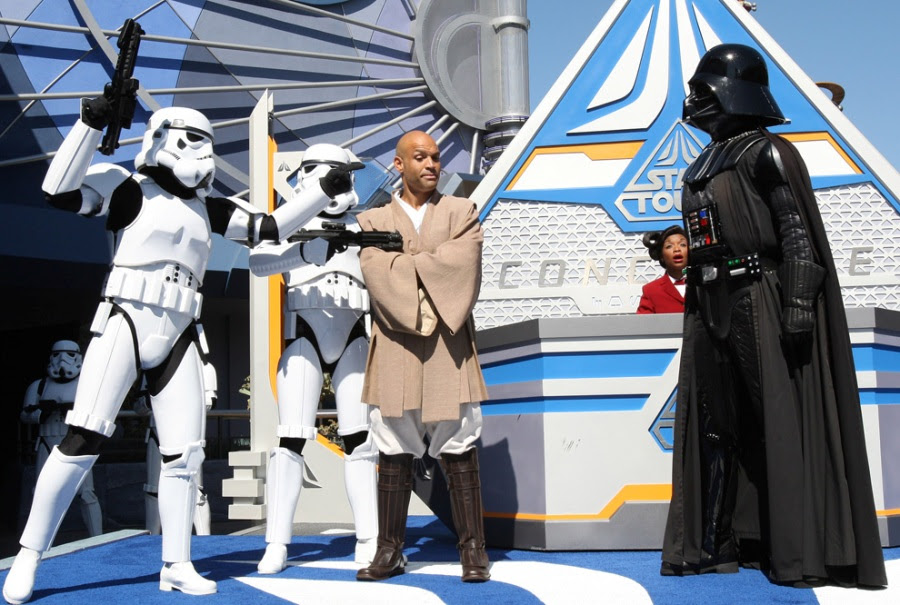 **Currently: 06/02/2011: An announcement about a Live Stream will be soon! Stay with MousePlanet.com today as we offer live coverage and photos from today's opening ceremony for the new The Little Mermaid ~ Ariel's Undersea Adventure attraction at Disney California Adventure.

The grand opening event is scheduled to begin at 3:30 p.m. Pacific time Thursday afternoon (6:30pm Eastern Time 6/02/11). Walt Disney Company President and Chief Executive Officer Bob Iger, Disneyland Resort President George Kalogridis, and actress Jodi Benson, the voice of Ariel in The Little Mermaid and in the original film as well as the new attraction, are scheduled to appear.

You can watch the entire show here or below you can watch small clips of the ceremony premiere!


The video of today's Press Event Stream of the Ceremony will be up and running once its processed. You can see it here: http://vimeo.com/24600645

With The Little Mermaid ~ Ariel’s Undersea Adventure, the Disneyland Resort continues “to leverage new technologies to tell a timeless Disney story,” said Chairman of Walt Disney Parks & Resorts, Tom Staggs, “because at our heart, great storytelling is what we are all about.” 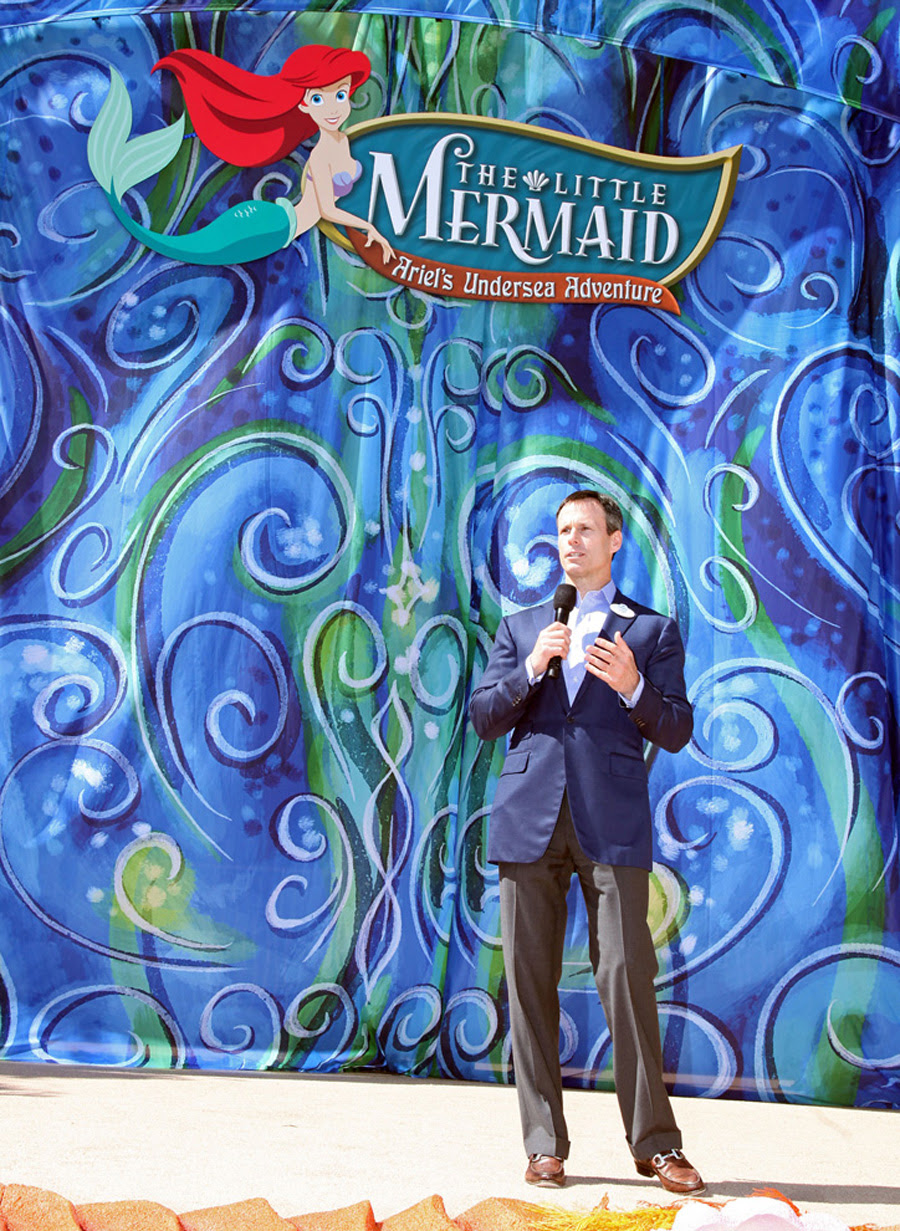 Jodi Benson, the voice of Ariel, performed “Part of Your World,” one of the memorable songs from the film’s Academy Award-winning score. Earlier today, we celebrated the opening of The Little Mermaid ~ Ariel’s Undersea Adventure with a special ceremony at Disney California Adventure park. 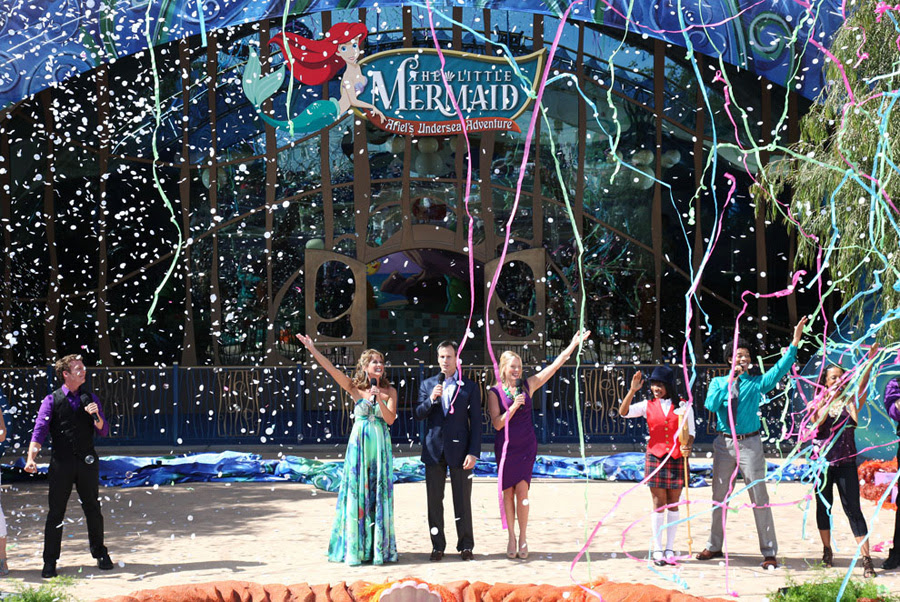 Sherie Rene Scott, who originated the role of Ursula in the Broadway production of "The Little Mermaid," performs "Poor Unfortunate Souls" at the dedication ceremony for The Little Mermaid - Ariel's Undersea Adventure. Photo by Frank Anzalone. 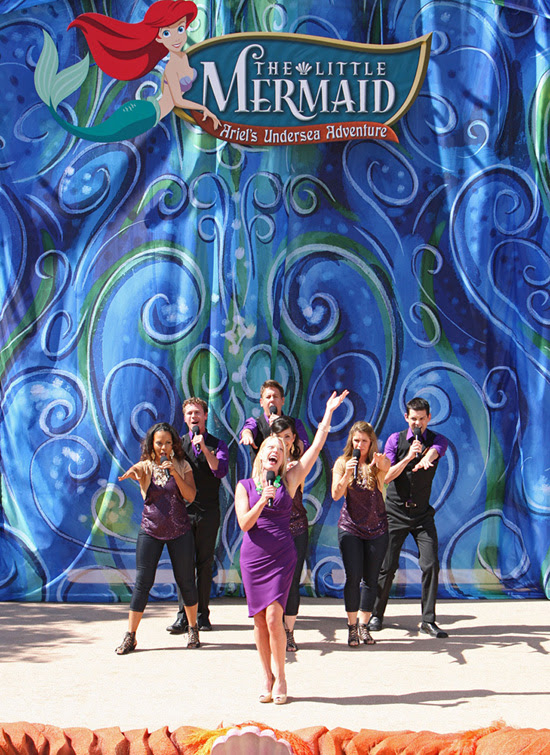 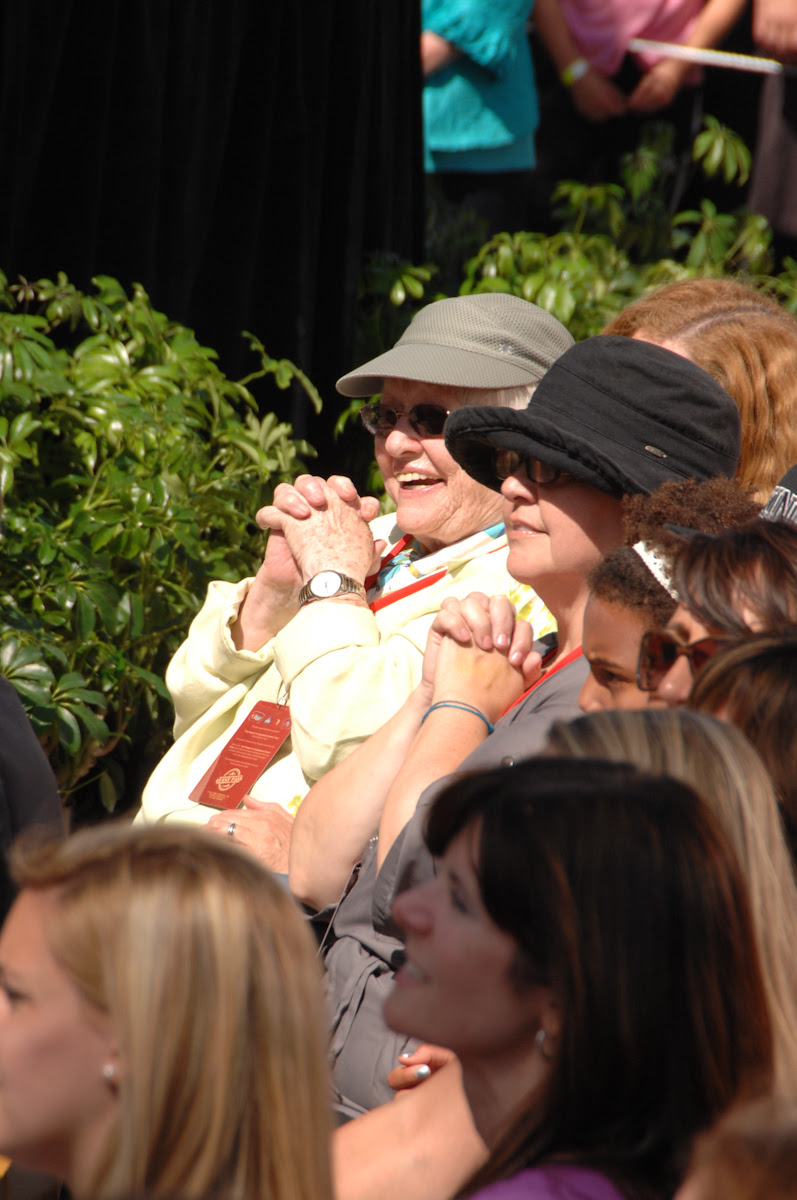 Pat Carroll, the voice of Ursula for the animated feature, greets fans and riding the ride. What an exciting moment! Jodi Benson and Pat Carroll, the familiar voices behind Ariel and Ursula from 1989’s animated hit, “The Little Mermaid,” reunited and rode the new attraction, The Little Mermaid ~ Ariel’s Undersea Adventure at Disney California Adventure park yesterday. They’ve obviously remained good friends, because they greeted each other with warm hugs and hellos outside the attraction. As Pat said before she boarded one of the clam shells, “This is an exciting day!” For guests and fans of their movie, “The Little Mermaid,” it’s been 22 years of waiting for a Little Mermaid attraction. For Jodi and Pat, it’s been 25 years! They began working on the film in 1986. It was so much fun to see their reactions to the characters they helped bring to life. It’s also fun to hear Pat laugh, because you can hear Ursula in her wonderful laugh. Check out this video and see for yourself this special moment.

Full Ride-Thru (Spoiler!): To watch the entire ride, watch below!


May the force be with you & Keep on Swimming!

Posted by Randydorney at 7:10 PM 0 comments