It's been a long time since we've talked about any new information related to the Dorneyonline.com Simulation updates!

The webmaster/founder of Themagical.nl posted some interesting tweets recently and I thought I would keep you posted on the current status of the 'Steel Force Simulation' updates.

- Finally fixed the problem, new queue gates are working, so the queue can be modified #SFsim. Good night everyone, heading for my bed

- My bad, found it: cannot use a name for a movie clip when it's the same as the object in the library, not that unlogical...

- puzzled: why can the name of a movie clip not contain a number if there are functions defined into it? Just wondering why.

- Flash continues to bug me today, still thinks that a function is no function, even I have written it the right way :(

We are looking forward to start the beta testings so you can enjoy this before we release the simulation for the public to enjoy!

Play our Simulations on the Wii !! 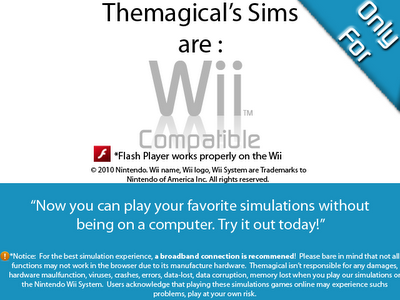 A small fun update for all may or may not know already. For those who haven't, for those who have a Nintendo Wii console and a broadband internet connection can play our simulations!

That's right, you can play our simulations as you would on a pc but on your gaming platform device!

To play our simulations is quite easy, go to your 'Internet' button and click 'address' button and type the web link http://www.themagical.nl/

Then you are ready to play our simulations like you would on your computer. Thanks to the Opera browser has a pre-built version of Flash in the browser so you know you won't have to update or download the Flash Player.

HAVE FUN AND GAME ON!

PS. **Notice: The http://sims.themagical.nl/ web-flash based has not been tested nor haven't been checked to see if its 'Wii Compatible" either. For the best simulation experience, a broadband connection is recommended! Please bare in mind that not all
functions may not work in the browser due to its manufacture hardware. Themagical isn’t responsible for any damages, hardware malfunction, viruses, crashes, errors, data-lost, data corruption, memory lost when you play our simulations on the Nintendo Wii System. Users acknowledge that playing these simulations games online may experience such
problems, play at your own risk.

It's been a long time since we've talked about any new information related to the Dorneyonline.com Simulation updates!

The webmaster/founder of Themagical.nl posted some interesting tweets recently and I thought I would keep you posted on the current status of the 'Steel Force Simulation' updates.

- Sometimes I'd wish days could last longer, so i'd had more time to work at the #Themagical #sims. Especially testing takes a lot of time.

- And the weather system of the #SFsim needs some animations and additional effects.

- 2Still 2 major point for the #SFsim: queue system and operation schedule, both are working but need to be tweaked..

- Again spend some time yesterday, preparing the #SFsim for the beta tests, still looking into some small issues, which have to be fixed

We are looking forward to start the beta testings so you can enjoy this before we release the simulation for the public to enjoy!

Posted by Randydorney at 11:10 PM 0 comments

We are within about one day before here in the "States" have the national holiday of Thanksgiving!

Ah...the second best time of the year to come together with family and friends over a delicious hot juicy turkey and all the fixings. I know this is my favorite time of holiday to enjoy delicious food and fellowship.

Even getting together for a meal is wonderful to enjoy and celebrate as one. Where ever you are at right now, think of things that you are thankful for this year. It's great to reflect on these things and as well to find ways to help others in need. Maybe even volunteering at a local soup kitchen to feed the homeless this holiday season and many other ways to help families who are in need of help to provide a hot meal this holiday and as well daily life.

As the following day after thanksgiving, is a season where everybody goes shopping like a mad crazy person. This is known where stores around the nation sells items for real less prices and as well make great deals for certain hours of the day! This is called "Black Friday".

"Black Friday" is a term where the day after thanksgiving, people will go to the stores very early early in the morning around 1am or so to buy items that are hot ticket items. Local stores like Best Buy, Walmart, Sears, etc... will sell certain products the night of black Friday, people who stand for hours before the store close, just to be the first one to get hands on a hot selling product. People usually shop for christmas deals already and finding prices that they can afford since we are all still in the economy is weak. So hopefully, more revenue will help stores and as well the people who work there make a decent pay check this season.

For all of those who are visiting us here and as well who are members from the "States", the staff of 'Themagical' team wishes you and your families to have a safe and enjoyable thanksgiving day!

Posted by Randydorney at 12:13 PM 0 comments 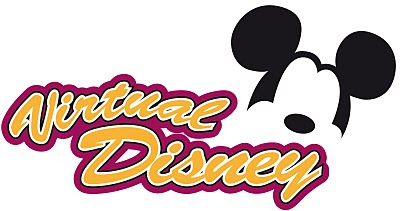 As you may or may not know, our fellow Themagical Community user "Brianelvio" has been working on a project called: "Virtual Disney" website/online gaming.

Below are the information that is already posted on our forums. If you have any questions, please contact brianelvio via email or Private Message on Themagical's website. Thanks!

The new v0.2 Beta is here new better avatars new client and game!
Still building maps now there's only the enterance and a secret beta shop try to find it and get a beta hat! Remember it is not very big! Read the news in client for account creation!

If we choose you you can go further than normal beta users and when the stable open beta will come online you will get a special beta testers item!
We need you!

We hope you can be part of this new beginning for our good fellow user of Themagical Community and test it out!

If he asks you where did you hear about this, ask "Reighard" posted on the Themagical's Blog.
Thanks! He'll know that its coming from a good reliable resource connection and friend.

Have a magical day! 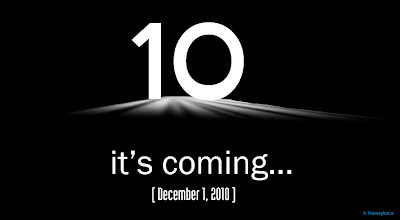 Posted by Randydorney at 10:46 PM 2 comments

Is there anyone who is capable of producing a new feel and look for Themagical (Joomla template - non-commercial)? Because the website celebrates it's 10th anniversary next month, I want to give the site a refresh in the near future and give the simulations a central spot.

Recently there hasn't been much updates on the "Steel Force" simulation since we've been working hard on it.

(*Click on the image to see a larger view of it.)
ENJOY!
Posted by Randydorney at 3:34 PM 0 comments

Spring Back Time and Voting!

I want to share "2" friendly reminders that's important to our US States Readers:

On March 13/14, 2010 at the stroke of midnight there was a short announcement on almost all media outlets, but even then I heard some confusion, as to which way the clocks must be adjusted, so for those who might still find it difficult to remember the system, learn a simple cheat code Spring Forward – Fall Back.

In April which is around the spring season you adjust your clocks one hour forward, while in October which is the fall season you adjust your clocks one hour backward. Hence Spring Forward & Fall Back Do yourself and your family a favor, take round of your entire house and tweak all the clocks that you see, cell phones and also adjusting computer clocks (some computers automatically changes their settings via clock settings on your PC/Mac/Linux).

Why, when, who, and what is daylight savings time and what's the reason we change our clocks every year and during the year? Click here for more information!

The update that this article describes changes the time zone data to account for the DST change for the United States. This update also includes other DST-related changes, time zone-related changes, and settings-related changes. Some of these changes will occur in 2007. Some of these changes have occurred since the products that are listed in the "Applies To" section were originally released. The update that this article describes is a cumulative update rollup that includes all the changes that were previously released in Microsoft Knowledge Base articles 928388 and 929120. This update also describes some additional changes since the last cumulative update in Microsoft Knowledge Base article 928388.

"Update cannot be installed as a newer or same time zone update has already been installed on the system."
This message indicates that you have already applied the correct update or that Windows Updates or Microsoft Update has automatically installed this update. No additional action is required to update your Windows operating system software.

#2.) Minor Voting for US States Residents!! Go out and VOTE!

For those in the US States, go cast your vote. Don't think your vote doesn't matter, it really does. Those few votes really does make a huge difference. Make your voice heard by voting today at your local areas that you need to vote at.

This voting this time of year is who is being elected or re-elected for congress. Most voting places in your area have been open by 6am and will be closing IMMEDIATELY at 7pm.

Now, I'm not saying about endorsing those who are running. All I'm saying it is a privilege to have a given freedom right to vote in our country. It's your choice to vote or not but I feel its a great honor as an American individual to express my rights as a U.S. Resident of this country.